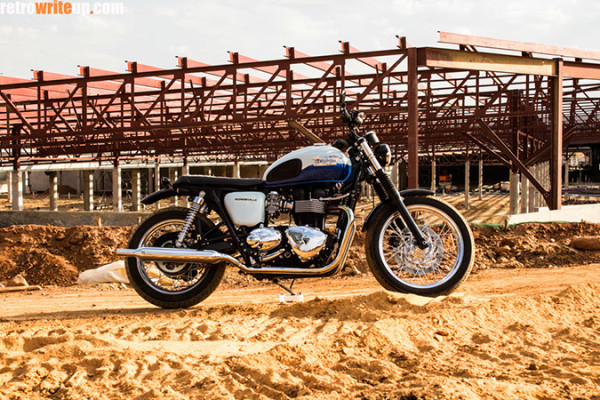 If you ask an enthusiastic Harley rider what the abbreviation CTFS means in Harley-speak, he should easily be able to answer the question with “Chop That F@@&ing Sportster!” Although CTFS applies to Harley Sportsters; the most customised motorcycles in the world, it is applicable to Harley Davidson motorcycles in general. CTFS is a call to arms for Harley owners to personalise their Harleys by chopping, changing, painting, adding and modifying the motorcycles from the moment they buy them. Very, very few stock standard Harleys, including the special or anniversary models, leave the showroom floor. This raises the following question about other makes of motorcycles. When is it acceptable to customise a modern motorcycle, especially the so called “limited edition” models? After all, if motorcyclists had all kept their motorcycles stock standard for the last 113 years, there would have been no cafe racers, no bobbers, no choppers, no road racing, no off-road racing… 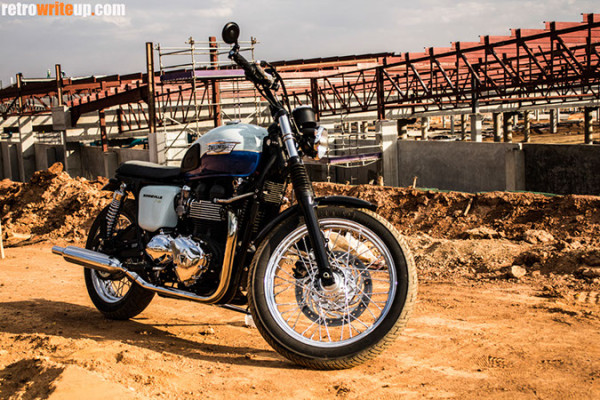 Let us take our featured motorcycle, a 2009 Triumph Bonneville Anniversary model, as an example. This Bonnie belongs to Barry whose Kawasaki Desert Sled and Yamaha SR500 cafe racer we have previously featured. This is Barry’s daily ride. The Anniversary model celebrates 60 years of the Bonneville. Only 650 specially numbered motorcycles were produced. They were all painted in the same two tone colours similar to the original 1959 Bonneville. Besides a small plate designating the particular motorcycle’s unique position in the 650 unit production run and the paint colours, the Anniversary is basically a standard T100 Bonneville. On purchasing the motorcycle, Barry ignored the advice and opinion of many and customised the Bonneville visually to suit his own taste, as would have been the case of someone buying the original Bonneville back in 1959. 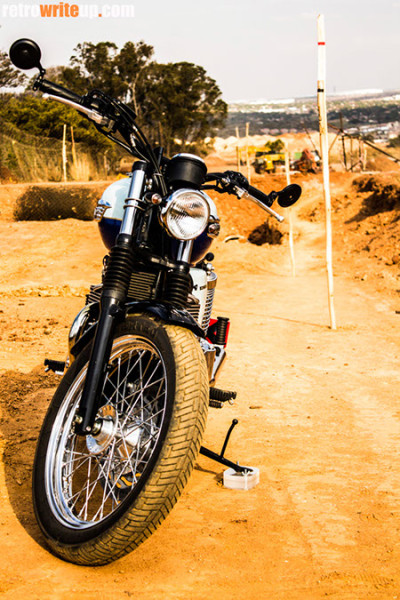 Barry began preparing for his build by accumulating and preparing all the new elements and having the special brackets and plates that were required laser cut and painted. Once he had everything together,the whole customisation process was completed in a weekend. It must be noted that the Bonneville can be returned to original if so required. Although it was necessary to cut the rear subframe to fit the shorter, flatter custom seat, the removed piece has been kept should it ever need to be reattached. The aluminium seatpan and sponge were shaped by Barry and covered by Dion the Leatherman. The rear mudguard is a Harley Sportster 48 front mudguard. Barry imported the well made led taillight. He imported a few extra taillights at the same time because the freight costs were the same for one or several units. If you are interested in purchasing one of these taillights, contact Old School Trading. The plates for repositioning the small indicators were specially laser cut to Barry’s design. 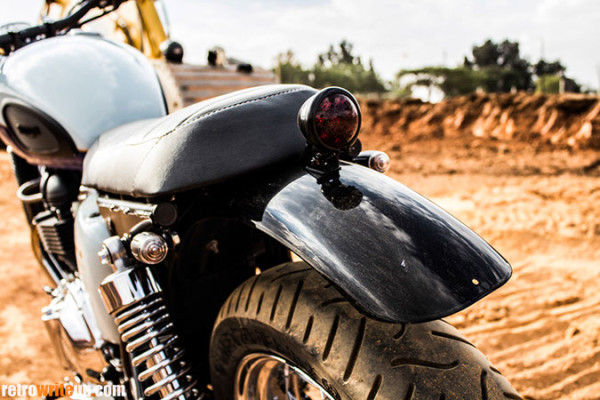 A small headlight replaces the far bigger standard unit. Barry jokes that it provides perfect vision at night, as long as he has someone to follow. The simple headlight bracket consists of a laser cut plate and U clamps around the shocks. The indicators are used to hold the headlight in place. To tidy up the front end further, Barry moved the rectifier from its original position between the shocks to a new position on the frame; something I would immediately do if I owned a Bonnie. 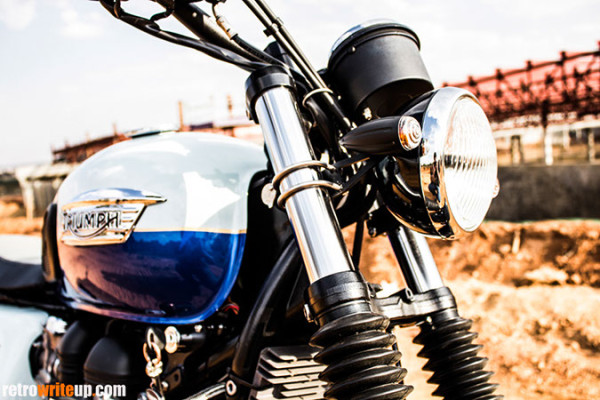 To further lighten up the front end visually, the ignition, which originally is mounted to the side of the headlight, has found a new home on another specially laser cut plate on the frame. 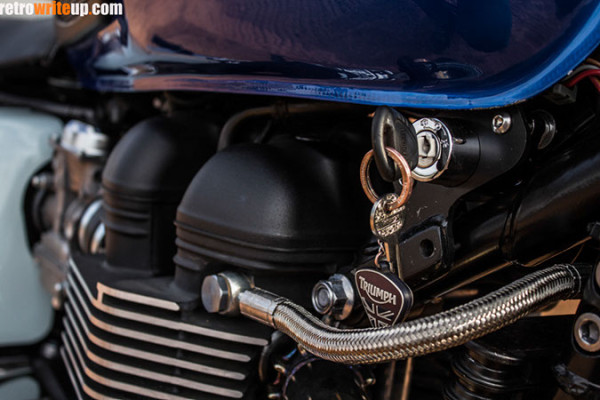 The standard speedo has been retained but the revcounter has been put away safely with all the other original parts. The specially made mounting plate places the speedo centrally with provision for the oil, neutral and indicator idiot lights. 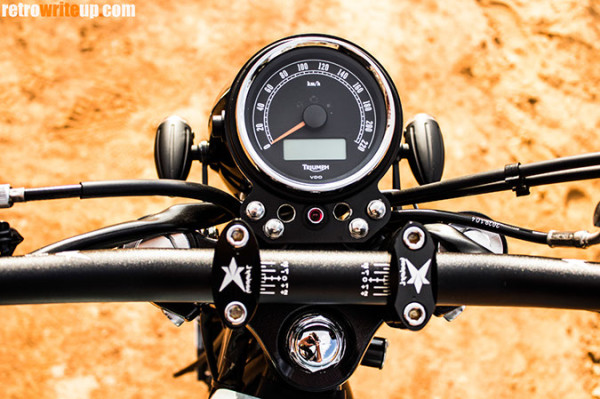 The front mudguard is off a Triumph Scrambler and has been painted gloss black to match the rear fender. The tank and side covers remain painted as they originally left the factory. The Assault handlebars and risers together with the bar end mirrors, give the front end a flatter and wider look. Retaining the factory fitted exhausts add to the overall uniqueness of this motorcycle. This Bonneville was never customised by Barry to be an off road motorcycle but Barry’s love of desert sleds and their colourful heritage clearly influenced his creation. Good work! 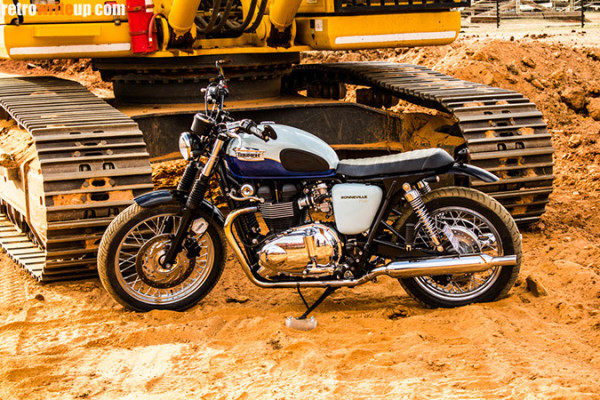 It would be arrogant of me to attempt to provide a definitive answer to the question about customising limited edition motorcycles. I guess it depends on what makes the motorcycle “limited”. There are certainly some modern limited edition motorcyles which are technologically or historically truly one of a kind and should probably remain preserved. However for most motorcycles variety has always been the spice of life. It is this ability to be easily customised that has kept motorcycling vibrant and motorcycles popular. It will also give the restorers something to do in thirty years from now! What do you think? 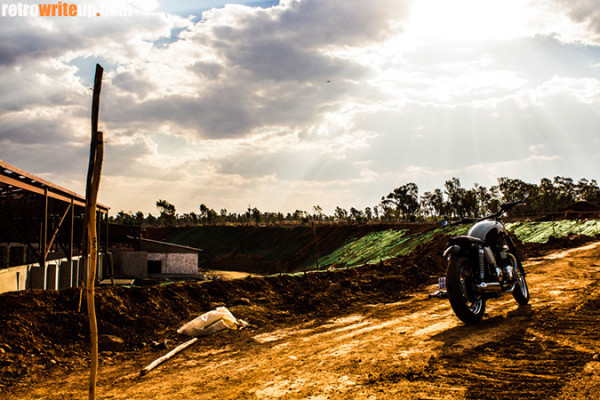