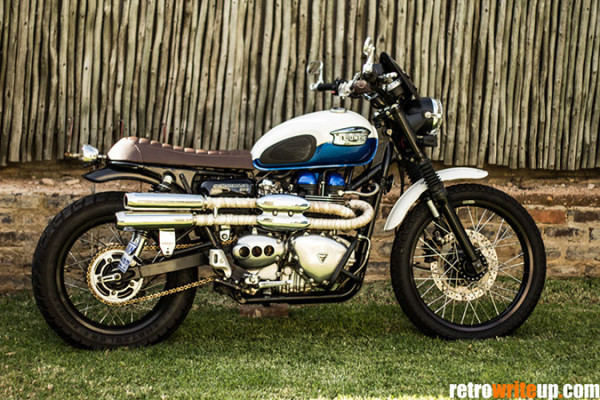 When a motorcycle is built to perform over unfavourable terrain, function is far more important than form. The rougher the anticipated terrain, the more specialised the required components and the less appealing the motorcycle will appear to those of us who are looking for smooth and uncomplicated lines. When BMW created the first adventure motorcycle with their ungainly R80 GS model in 1980, I doubt if they had any idea that they were also creating a whole new motorcycle market. The  ’70s had been the era of the Japanese street scramblers like the Yamaha XT500, which looked similar to the purpose built motocross models but were not really capable on dirt roads. In the ’50s and ’60s scramblers were also only slightly cosmetically changed versions of street models. Our featured modern Triumph Scrambler has its roots in the 1950s. 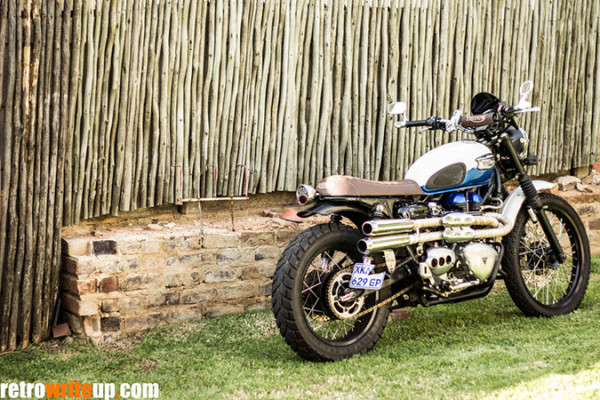 The Triumph TR6 Trophy was launched in 1956 to satisfy the US market’s demand for competitive, raceable but street legal motorcycles. In 1959 the high pipe competition model was introduced and was aimed at the desert sled racing fraternity. Steve McQueen entered the 1964 Six Day Trials on a brand new Trophy and also rode a 1961 model in the movie called The Great Escape. The reincarnation of  this legend was released as the Scrambler in 2006. Triumph would probably have called it a Trophy but they had already used the name for another model. The Scrambler is basically a Bonneville which has been redesigned to allow for limited off road capability. The front and rear suspension has more travel than a Bonneville. Different handlebar styling and footpeg position provide a more off road orientated seating position. The upswept exhausts are reminiscent of the original Trophy of which many of the styling cues have been reproduced but with modern improvements. Trail tyres are fitted to the 19 inch front and 17 inch rear wheels. Perhaps the biggest difference between a standard Bonnie and a Scrambler is the engine. The motors are identical except for the their crankshafts. The Bonneville uses a traditional 360 degree crank whilst the Scrambler uses the 270 degree version as used in the cruiser styled America and Speedmaster versions.This crank configuration provides more bottom end grunt from the 54hp engine. The uneven firing pattern gives the Scrambler an almost V twin engine sound. This is, for my money,  the  sweetest sounding engine in the entire Triumph range of motorcycles. Perhaps it is because it sounds more like my beloved Harley Davidson’s potato potato exhaust note. 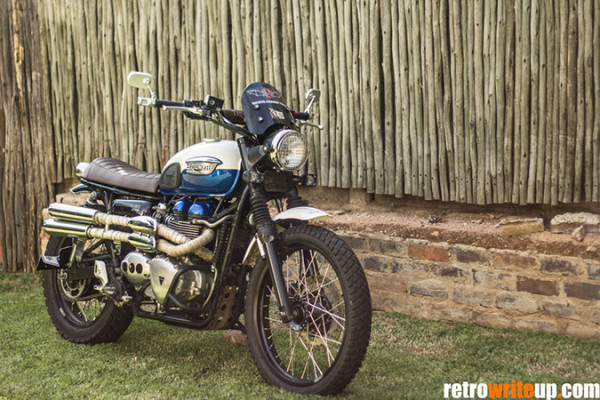 Our featured motorcycle belongs to Clive from Edenvale. He has modified this beautiful Scrambler extensively to improve its off road performance without detracting from its classic lines. Ikon shocks are fitted to the rear whilst the internals of the front shocks have been improved. An 18 inch rear rim and spokes have been installed at the rear whilst a more dirt friendly 21 inch wheel is  fitted up front. The wheels have been  powdercoated black. The standard  but shortened exhaust headers have been wrapped and are now fitted with specially fabricated silencers made by Mark Lewis from Retro and Supermods.The Scrambler’s carbs were rejetted to suit the pipes and the better breathing air filters.The skid plate under the front of the engine and the engine bars are Triumph accessories which provide  protection for the engine in the event of a fall. All of these enhancements have turned this off road look-a-like into a practical dirt road motorcycle. 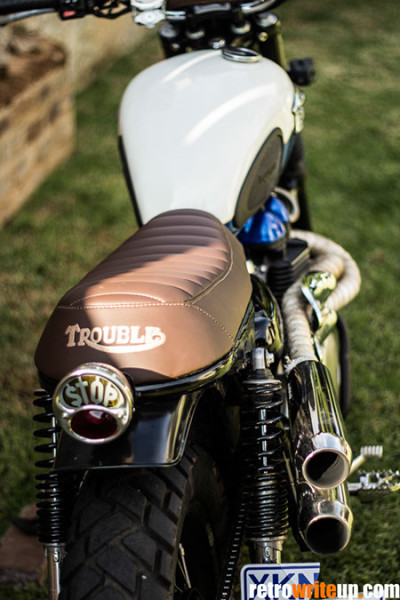 Cosmetically Clive has also made many changes. Retro and Supermods shortened and looped the rear subframe, fitted a new rear mudguard and created a new seat pan which was beautifully upholstered by Dion the Leatherman. Note the Trouble name stitched in the Triumph font and logo style. A Biltwell replica of a 1932 Ford model A tail light which is a product  imported by Marnitz’s Old Skool Trading has been installed by Clive on top of the mudguard and the number plate is now on a sidemount bracket. The cam covers have been painted to match the tank and Clive drilled the three holes in the casing.. A wire mesh headlight protector and a flyscreen are Triumph accessories although Clive painted the clear Lexan of the screen black. The standard front mudguard had to be raised to accommodate the new larger diameter wheel. The bar end mirrors include the indicator lights which are visible as front and rear indicators. 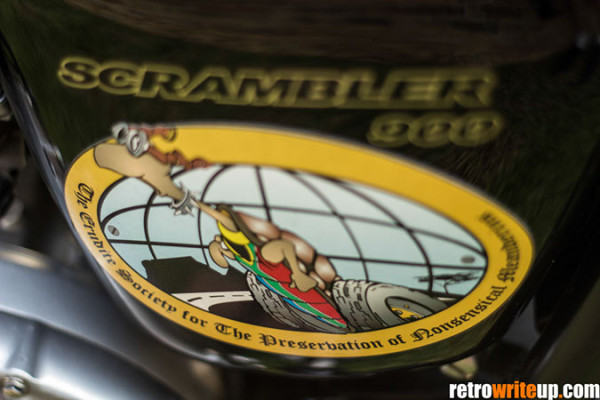 This Scrambler has done nearly 40 000km, of which Clive estimates 40% was dirt riding. As a member of  “The Erudite Society for The Preservation of Nonsensical Meanderings”, a group of friends who travel by 4×4 or motorcycle on a variety of excursions, this Triumph will have many stories to tell in its lifetime. Clive’s other Triumph,  a Tiger  800XC,  is a far more appropriate and capable dual purpose motorcycle. He however says that if he were ever faced with the choice of having to sell one of his Triumphs, he would keep the Scrambler because it has more character. I think Steve McQueen would agree.