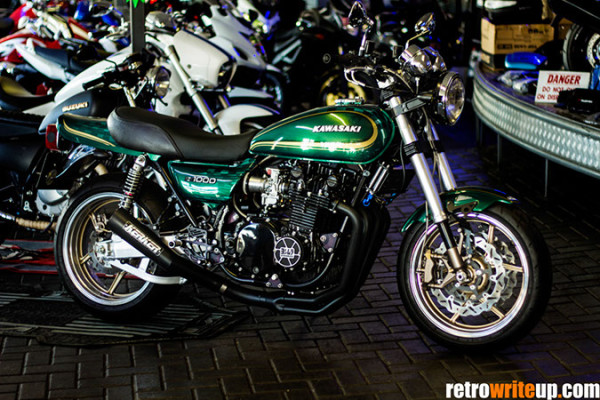 I try to remain unbiased when it comes to the motorcycles we feature but occasionally I allow my passion for a particular model to become apparent. This is one of those occasions. The Kawasaki Z900 and Z1000 of the 1970s earned the name “The King” and as far as I am concerned this king is still sitting on the throne. The styling on these motorcycles is still gorgeous forty years after they first hit the streets in 1973. The tail piece, sidecovers, gauges and tank shape are, to my eye, works of art. The custom world may be Honda 750 Four besotted at the moment, but back in the day these Kawas were the weapon of choice for real bikers. It is amusing that Kawasaki motorcycles mother company is officially known as Kawasaki Heavy Industries. Heavy duty motorcycles made for heavy duty bikers. Kawasaki were secretly working on their own 750cc four stroke four cylinder model for release in 1970 when Honda surprised the world, including Kawasaki and all the other manufacturers, by unveiling their groundbreaking K0 750cc in 1968 which would be available internationally in 1969. Kawasaki revised their thinking, deciding that a bigger 900cc capacity would have to be the answer to the Honda. Part of the brief to the designers and engineers was that the motorcycle should have no defects. The new development process meant that this motorcycle, which was originally going to be named the Super Four but was renamed the Z1, was only launched in 1972. With a top speed of around 210 km/h and 82hp the Z1 broke and set 45 American and world speed and acceleration records in 1973. The King was on his throne. The fact that the engines were too powerful for the frames, that the handling became a little scary at high speed and that the single front disc brake was inefficient may appear as defects to many of you but not to the owners of these motorcycles at the time. Most of them, in South Africa anyway, were too drunk to notice or too tough to care! 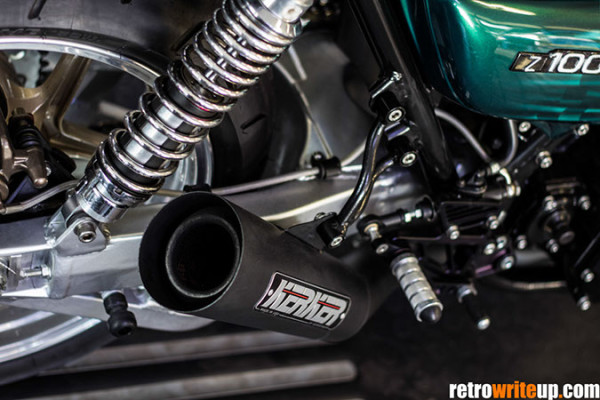 Our featured motorcycle is another of KCR in Kempton Park’s high end creations. This beauty, which is owned by Henk, is based on the Z1000 which replaced the Z900 in 1977. All the styling elements that I mentioned earlier which make the Z1000 unique and desirable have been retained, including the original seat. The front mudguard is off a Suzuki GSXR and looks super in this application. The green paint colour with gold striping also remains true to the original model as does the Kerker aftermarket 4 into 1 exhaust, a must have addition to these Kawas back in the day. 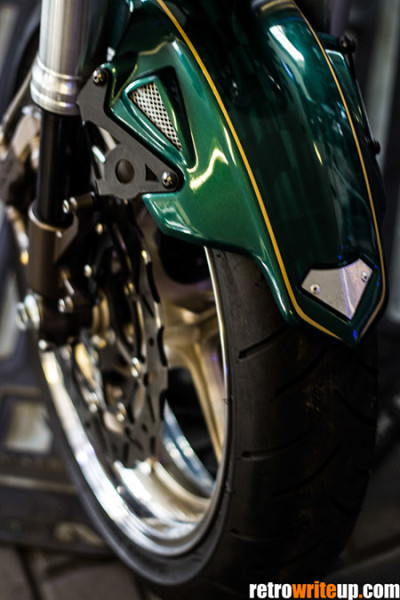 But beauty is only skin deep. It is in the running gear where KCR have worked their magic. Kawasaki ZX10 upside down forks with twin discs should help more than a little with the front end handling. A modified Suzuki TL1000R swingarm adds rigidity to the rear and has been modified to retain the twin shocks. The wheels are off a 2004 ZX10. KCR custom motorcycles are finished to a very high standard, like their machined billet handlebar clamp, celebrating 40 years of the Z models. This motorcycle must surely achieve the “no defect” status Kawasaki were striving for when they first put pen to paper. 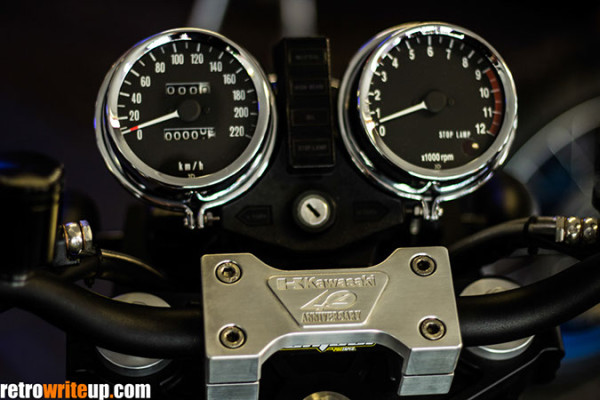 The question is, why, if they were that good, are there so many 1970’s Honda 750s around and so few Z900 and Z1000s left? There are several reasons. More Hondas were sold as they launched four years earlier. I am not exaggerating when I say these Z models fell into rough hands. Ask the guys who were serious bikers back then. These motorcycles were destined for destruction. Plenty of them were written off with their owners. Many of those owners who survived the ’70s have still got their beloved Kawas stashed away and would not sell them at any price. They are a true cult motorcycle. Oh and speaking of cults, did I mention that after a Z1000 starred in the Mad Max cult movie in 1977, Mel Gibson also became famous!