When it comes to café racers built in the traditional style, there appears to be two distinctly different approaches developing. Both approaches are equally difficult to execute successfully and both provide us with very exciting motorcycles. The first approach is to build café racers from 1970’s  or 1980’s model motorcycles to look as if they were 1960’s café racers. Even motorcycle makes and models which would never have originally been considered for conversion are customised so well that they would have blended in perfectly parked outside London’s Ace Café in the 1960s. The second approach also uses 1970’s and 1980’s  models but uses far more modern components and finishes to create a more 21st century, yet still clearly recognisable version of the 1960’s café racer. These modern interpretations would even turn heads if they arrived at the Ace Cafe  this weekend. Our featured Suzuki GS750 falls into the second category. 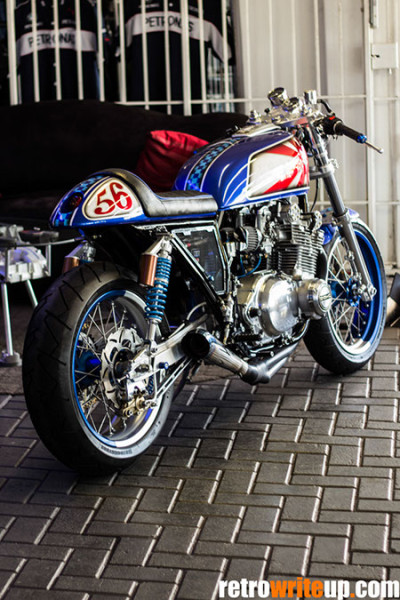 We have previously featured several custom motorcycles based on the bullet proof Suzuki GS750 so we will just repeat the most important facts and figures for this model. They were launched in 1976 as Suzuki’s long overdue but excellent first four stroke powered motorcycle. It handled better than the other Japanese rivals models and produced 72hp from its four cylinder engine. This was a great all-rounder from the late 1970s. 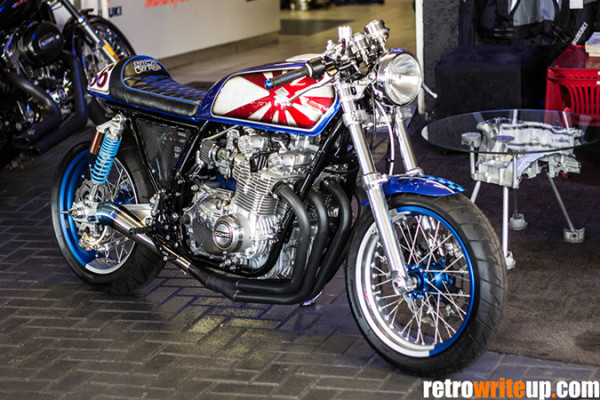 This stunning 1979 model GS750 was built by KCR Motorcycle Fanatix from Kempton Park. We have featured many of their creations based on 1970’s motorcycles but this particular café racer belongs to KCR’s owner, Alan. As we stated earlier, this motorcycle is a perfect example of  more modern elements and finishes enhancing traditional styling. The two tone Alpina rims are originally off a Yamaha YZF450 supermotard. The  GSXR1100 swingarm has been modified to accommodate the very high quality twin gas shocks. A standard Cowley header is matched to a modern styled silencer. Gavin from JG Customs sprayed the standard tank, custom bumstop tail piece and front fender. Beautifully sprayed, the rising sun always seems appropriate on the older Japanese made motorcycles. Dion the Leatherman upholstered the seat, using matching blue piping with the KCR logo proudly embroidered on the bumstop section. This use of colour in paint and upholstery, the clear side covers, the machined billet mini gauge mounting bracket and six shooter brake fluid reservoir cover are just a few of the many elements which make a modern café racer such as this so special. 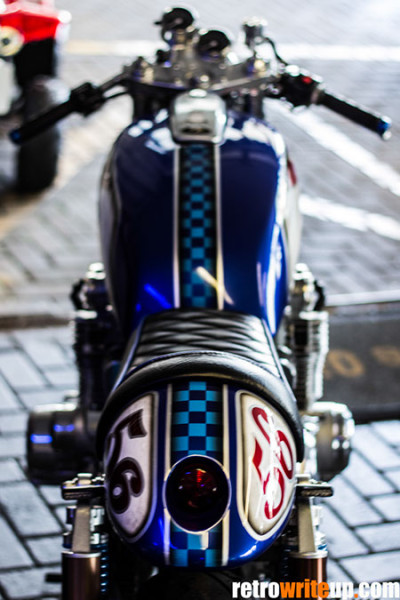 Whichever style of café racer you prefer, traditional old school or old school with a modern twist, we trust that you agree that generally café racers have never looked better or been more appealing than what they are right now. When will we feature your creation? 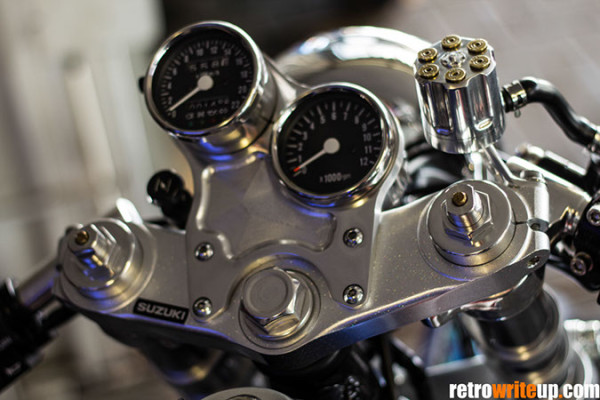